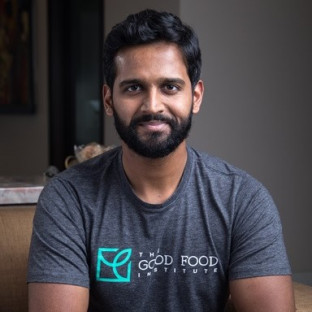 Varun Deshpande serves as Managing Director at the Good Food Institute India, where he is focused on building the future of food by working with scientists, foundations, governments, entrepreneurs, and corporations to buildthe alternative protein sector across the country. As the son of a cancer surgeon from Mumbai, Varun has been deeply immersed in healthcare and technology from a very young age. He spent several formative years studying Chemical and Biomedical Engineering at technology hub Carnegie Mellon University. He then went on to work on implementing digital health in India and the United States. Varun is a leader in the effective altruism movement, which seeks to investigate and target the world’s most pressing problems. He has spoken at conferences and universities all over the world ranging from the Indian Institutes of Technology to Harvard University, and his writing has featured in media including The Hindu, FirstPost, and The Daily Guardian.