When the Queen acceded to the throne in 1952, British food and eating habits were unrecognisable from those of today. Rationing was still in place for some foods until the mid 1950s; sugar, butter, margarine, cheese, cooking fat, bacon, meat and tea were all still rationed. Rationing did not end completely until 1954, with sugar rationing ending in 1953 and meat rationing in 1954.

Availability of  fresh foods depended on whatever was in season at a particular time of the year. There were no supermarkets, so housewives shopped almost daily at small grocers, bakers, butchers and greengrocers. Few people owned a refrigerator and there were no domestic freezers. The only takeaway was from the fish and chip shop.

Many brands had disappeared during the war years, due to their transition into factories making products needed for the war and of course raw materials were in short supply. Companies issued apologies for their lack of availability, but still ran advertisements to keep their name in the public consciousness. Gradually, as branded foods returned to shops, companies recognised that now people had choice and their task was to woo customers.

Brands set out to win consumers with creative colourful packaging and posters and adverts in newspapers and women’s’ magazines offering inspiration and advice. Woman magazine started its Wooden Spoon Club in the early 1950s. But much more significant for brands was the rise of commercial TV. More families began to own or rent a television set – the ideal way for brands to target more customers.

Some brands excelled at marketing their products, (many offered free recipe booklets) and are still going strong today – British icons that have stood the test of time in a changing world of food and drink trends. Others failed to stand the test of time and disappeared over the years.

Tea rationing ended in October 1952 and Lipton and Tetley introduced  tea bags, although they didn’t catch on in Britain as they had in America. Consumers were unsure about the new product and preferred to brew loose leaf tea the traditional way in a teapot. It was to be years before tea bags overtook loose leaf tea; today 96% of consumers use tea bags instead of tea  leaves.

Heinz had introduced canned baked beans in the early twentieth century and production continued throughout the war as The Ministry of Food classified them as an ‘essential food’ in wartime rationing. Other successful Heinz products in 1952 included tinned soups, baby foods, and salad cream, (created specifically for the British market) – still best sellers today. Heinz also made a range of tinned salads: potato salad, vegetable salad and coleslaw, which were discontinued in 2011, and tinned sponge puddings which were withdrawn in 2015 .

Spam arrived in the UK in 1941 during the Second World War and quickly became a welcome part of the diet. A mixture of  cooked chopped pork and ham, sold in distinctive tins, it could be sliced and fried, dipped in batter and deep fried, chopped and put into stews and pies or simply eaten cold, thinly sliced in sandwiches. The first UK tin of Spam was made at the Newforge Foods factory in Liverpool, where it was produced from 1941 to 1998. Spam continues to have healthy sales; there’s now a ‘lite’ version plus other varieties such as with added bacon and frozen Spam fritters.

Jars of piquant pickle became a cupboard essential in 1952 to perk up the plain bland foods of the time, particularly sandwiches. Pan Yan Pickle, the best-selling sweet pickle in the UK, was acquired by several owners over the years. Nestlé owned the brand in 1987, but as they already owned the Crosse and Blackwell brand of Branston Pickle, they discontinued Pan Yan in 2000.  The final owners, Premier Foods continued production until the only copy of the original recipe was lost during a fire in 2004 and the factory closed.

Crosse and Blackwell Baked Beans from the 1950s. Image: Museum of Brands

Tins of food and Spam from the 1950s. Image: Museum of Brands

Left: Crosse and Blackwell Baked Beans from the 1950s. Image: Museum of Brands

Right: Tins of food and Spam from the 1950s. Image: Museum of Brands

Branston Pickle – a sweet and spicy mix of mixed pickled vegetables in a thick brown sauce, launched in 1922 and is still a firm British favourite. It’s now produced by Japanese Mizkan foods and is available in chunky and smooth varieties and in squeezy bottles as well as jars.

Dairylea spreadable cheese triangles in a round box were first introduced in 1950 and the public loved them. There was also a mixed box of flavours such as spring onion, ham, tomato  and celery, but these were discontinued in the 70s and 80s.  Plain triangles are still a best seller, alongside tubs of cheese spread and cheese slices and all are now available in ‘lite’ versions.

Solid blocks of soft white vegetable fats, such as Cookeen and Trex are still on sale in today’s supermarkets . Their advantage in 1952 was that 20% less than butter was needed in baking. Easy to use, they can be used straight from the fridge to make pastry and cakes and for frying and roasting. They outsold another similar product, Spry (‘the pure white fat that’s whipped up for lightness’) produced by Lever Brothers which was discontinued later in the 1950s, due to dwindling sales.

Lyles Golden Syrup has stood the test of time and the Guinness World Records states that the classic Lyle’s Golden Syrup tin is the world’s oldest unchanged brand packaging, remaining basically the same since 1883. Black treacle was launched in 1950 which also became a staple in food cupboards.

Robertson’s jams had their heyday in the 1950s. The jars’ labels included a golly character, a black-faced minstrel doll with his jaunty red bow tie and trousers, blue jacket and yellow waistcoat. Ten paper gollies could be exchanged for an enamel brooch, which are now collectors’ items. The character was axed from television adverts in 1988, and then disappeared from the labels in 2002. The jams were phased out and production ceased in 2009, although Robertson’s Golden Shred orange marmalade and mincemeat are still made.

Bird’s custard powder remains one of the most recognised British brands. The egg-free powder, mixed with milk was especially popular in 1952 as eggs were in short supply. The company issued recipes using its product to make puddings, sweets and desserts.  There were also a few savoury recipes included, such as salmon soup (made with tinned salmon, custard powder, a little butter and milk) and tomato and cheese moulds.

There was a very limited choice of sweets. Although sweets were still rationed (ending in 1953), parents exchanged ration coupons for treats for their children. Jelly Babies (invented to celebrate the end of the First World War, when they were called Peace Babies)  made a welcome return in the 1950s boasting their new name.

Barratt’s Sherbet Fountain, a mouth tingling sherbet packed in a paper roll accompanied with a hollow stick of liquorice to suck through the sherbet, has been a favourite with children for generations. Now owned by Tangerine Confectionery, in 2009 the company replaced the hollow stick of liquorice with a solid stick covered with a plastic cap, so it’s now more of a sherbet dip.

Spangles, a brand of wrapped fruit flavoured boiled sweets in a tube were manufactured by Mars from 1950 and were very popular as they had the added bonus of needing only one ration point instead of the two points required for other sweets and chocolate. Discontinued in 1984, they made a brief reappearance in 1995,  but were dropped in 1998.

Fry’s chocolate was acquired by Cadbury’s in 1919 but kept the brand name for some products., such as Turkish Delight and Crunchie bars. Fry’s Chocolate Cream, a dark chocolate bar enclosing a plain white fondant centre remains one of the country’s oldest chocolate bar brands. Fry’s Five Centre was similar, but with fruit flavoured creams running through the middle. Each chunk had a different flavour and colour (orange, lemon, lime, strawberry and raspberry). Production of Five Centres ceased in 1992. Despite their popularity, Fry’s Punch, a  rounded chocolate bar filled with creamy caramel and Fry’s Five Boys chocolate bar (the wrapper showed a young boy’s face passing through five expressions of ‘Desperation, Pacification, Expectation, Acclamation and Realisation’ as he eats his Fry’s chocolate) were both withdrawn.

Camp Coffee is a concentrated dark brown syrup, flavoured with coffee and chicory. Coffee drinking wasn’t widespread at the time, as most people preferred tea, but a bottle of Camp was a useful standby for visitors. Originally, the bottle label depicted a Sikh carrying a tray of coffee to serve a seated Gordon Highlander soldier. Today’s label depicts the Sikh and the soldier sitting down together outside a tent enjoying their coffee. By the 1970s, Camp had  largely been replaced by freeze-dried instant coffee and today its most widespread use is in baking, to add coffee flavour to cakes, buttercream and icings – so much so that the bottles  are often situated in the baking aisle in supermarkets.

Quintessentially English, Pimm’s is a gin based spirit with a fruity flavour, a subtle combination of herbal botanicals, caramelised orange and spices. James Pimm created No 1 Cup around 1840 and the secret recipe has remained unchanged to this day. The famous classic cocktail of one part Pimm’s No.1 with three parts of lemonade served with lots of ice, strawberries, oranges, cucumber and mint was established as the fashionable society drink in the first half of the twentieth century. In the 1950s, Pimm’s gave out guidebooks for ‘Pimm’s Parties’ to cater for the aspirations of a dreary post-war Britain.

HP sauce has been renamed HM sauce for the Platinum Jubilee

Right: HP sauce has been renamed HM sauce for the Platinum Jubilee

This year, among the commemorative mugs, tea towels, biscuit tins and other memorabilia issued to commemorate the Queen’s Platinum Jubilee, several brands have released limited edition packaging to celebrate the historic occasion. Heinz offer bottles of HM Sauce (HP Sauce) and Salad Queen (salad cream); there’s a special edition of the famous Lyle’s Golden Syrup tin inscribed with the words ‘seventy glorious years’; Cadbury’s have repackaged their classic, Dairy Milk Bar with Platinum Jubilee versions and are selling a tin of Roses chocolates with an image of red roses and a jewelled crown on the lid. Pimm’s No 1 have a limited-edition bottle which will temporarily replace the brand’s standard design. The limited edition label carries the message ‘Come reign or shine’.

The Queen’s Coronation in 1953 saw the one exception before rationing ended – an extra pound (450g) of sugar and four ounces (115g) of margarine given by the Government to every household. Street parties were held in every town and city with Spam sandwiches, jellies, cakes, fruit squash and other treats.

Divine delicacies: delectable foods and drinks born out of convents and monasteries 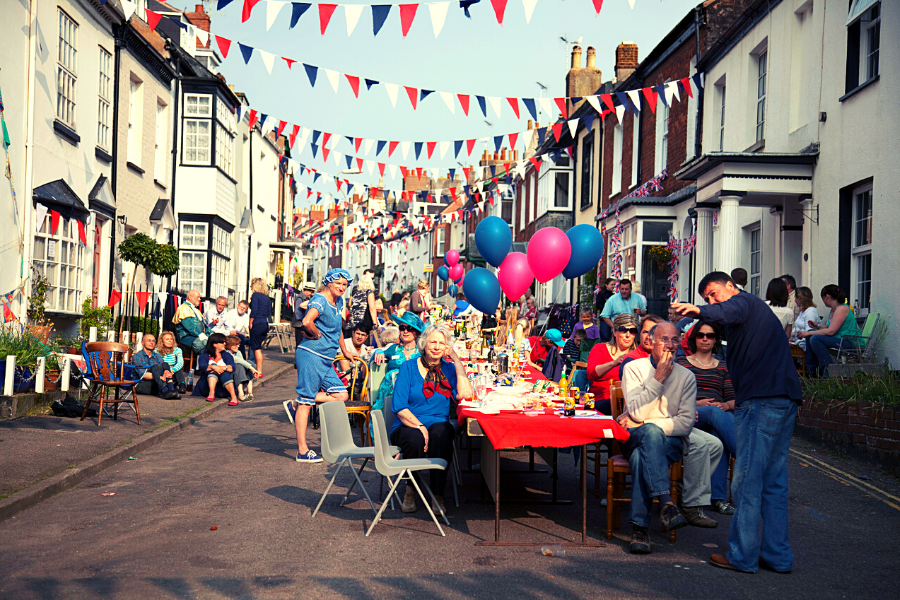 Peasant to posh: how ‘poor’ food has become a delicacy for the wealthy

The history of food packaging: how packaging design has changed through the years